When I went to university, I developed an interest of cooking. With the subsequent launch of the Food Network, I became even more interested in cooking. There are many personalities on the Food Network that I like to watch (Chuck Hughes, Jamie Oliver, Bobby Flay, to name a few) and some that I don’t like to watch (Ina Garten). My favourite of all time is Gordon Ramsay. I think that he often pours it on for the cameras, and that he is probably a different guy when not in a kitchen while being filmed, but I love the character that he plays.
﻿


Ramsay has many restaurants of different styles all over the world, but his career as a restauranteur started in London.  Since I started planning my trip to London, eating at one of his restaurants was almost as important as getting my picture taking at Abbey Road.
I have been staying with my friend’s Brandon and Nicole Donnelly, who recently moved to London from Calgary for a 3 year stint. I’m the lucky guy who is their first visitor. The Donnelly’s, like me, love to go out to nice restaurants, so Nicole took care of making reservations at Foxtrot Oscar on Royal Hospital Road. 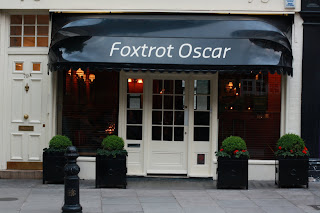 Nicole made the reservations the night before and the only time they had available was 8:00pm. Ramsay has many restaurants in London but this was the night before the Royal Wedding and Foxtrot Oscar was the only place we could get a seat. It is located a few doors down from Restaurant Gordon Ramsay. This was Ramsay’s first restaurant ever, where he launched his career as one of the most famous chefs in the world. We arrived to Foxtrot Oscar a few minutes early so I walked down to his first restaurant to take a picture. Outside this restaurant there is a man standing there who comes off as being a bouncer. This restaurant is world famous and I guess he is there to keep people like me from sticking my head through the door to get a look at the place. He was more than happy to answer some questions and told to me that to get a table in there, you have to make reservations 2 months in advance!
We made our way back down to Foxtrot Oscar, and our first impression was disbelief in how small the restaurant was. My sister counted 32 people seated including the 4 of us.  I’m not really sure what I was expecting, but I guess I thought it was going to be bigger than it was. The ambiance was nice and for it being small, it certainly wasn’t too loud.


***Please note that all the photos were taking with a cell phone camera. I didn't want to be the guy in a nice restaurant with a DSLR, making a scene.
We all decided to get an appetizer and we made sure to order different dishes so we could all taste something different. Brandon had the dorset crab pasta, Nicole had the heirloom tomato salad, Ashley had the spiced aubergine salad, and I went for the grilled asparagus with a poached hen egg. Nicole loved the tomato salad and was still talking about it the next day. It’s ingredients were simple, but it was beautifully plated and full of flavor. The crab dish was a nice pasta starter that wasn’t over powering with the taste of crab. My dish was also very simple in presentation and ingredients, but very elaborate in taste. It just goes to show that good food doesn’t have to be complicated to be tasty.

For the mains, Ashley order the pesto pasta dish. She seems to have eaten a lot of pasta in our week long trip through the UK and Ireland. She liked it and so did I. Nicole and Brandon proved to me that they are a good match for each other, because they both ordered the same dish. The ang beef, which is a very lean cut of beef that was served rare was very tender. The highlight of their dish for me was Nicole’s Onion Rings that she got as a side. When they came to the table I thought the were going to be terrible. They looked nothing like your standard well battered onion ring. They looked like they were lightly tossed in some flour and then deep fried. Were we ever wrong. They were easily the best onion rings I ever had.

I scoured the menu and decided on the burger. Ramsay often talks about how he loves burgers. Everyone knows he can cook high end, pretentious food. I wanted to see how well he could do a burger and fries. Of course this was a gourmet burger served with a nice protion of chips (how the English call fries). The burger was excellent. I can’t say it was the best burger I ever had, but it would definitely rank in the top 5. The chips however might have been the best I ever had. My main must have been the most amount of food because everyone else easily finished their dish and I was struggling halfway through mine. Anyone who knows me, knows that appetite is not one of my problems. It should be noted that you can order your buger like you order a steak, rare, medium, well done, etc...
We couldn’t leave there without getting dessert. Ashley ordered a vanilla cheese cake with a rhubarb compote which we all agreed was maybe the best cheesecake we ever had. I was particularly fond of the presentation. It almost looked like an ice cream sundae. Brandon, Nicole and I opted for a classic English dessert, sticky toffee pudding with clotted cream. I was definitely too full to have ordered dessert and under any other circumstance I would have passed. But being in London at Ramsay’s restaurant I had to do it. The sticky toffee pudding was awesome. Clotted cream is essentially butter and cream. It looks like a cross between butter and cream cheese. It definitely complimented the sticky toffee pudding and made an already rich dessert ever richer.
The one complaint we had was the service. Our waitress was nice and friendly, but for a restaurant of that caliber, she made some blunders that I wouldn’t have expected. Brandon and Nicole both ordered sides for their mains and she forgot to bring them. When we reminded her about it, they had to be cooked fresh and they were mostly done their dish before they arrived. After dessert, Nicole and I both ordered tea which never arrived. The host came and gave us our bill and apologized for the waitress. He didn’t charge us for Brandon and Nicole’s sides, but when I got home, I looked at the bill and she did charge us for a drink that we never got. We didn’t let this ruin the experience for us, but it was a little surprising to see this at a restaurant of this kind of profile.
One of the highlights for me was chatting with the head chef. I’m a nosy guy and I noticed the the bathroom was close to the kitchen so I made it a point to go to the bathroom even though I didn’t need to so I could try to sneak a peek inside the kitchen. When I did, the chef saw me and came over to chat. I told him I had the burger and it was excellent. Both of us didn’t have English accents so we asked where each other was from and it turns out he was a Canadian from Vancouver.  He proudly told me that his Canucks won and advanced to the 2nd round of the NHL playoffs. He has been with Ramsay’s company for 5 years. He was at the main restaurant for most of that time and just took over this place last month. He was a nice, friendly guy. It was cool to see that a Canadian was running one of Gordon Ramsay’s restaurants.
When I asked everyone to rate this on a scale of 1-10 (10 being the best meal that they ever had) the average score was 7.5. Dinner came to 143 pounds (over $200 cdn) but we all agreed it was worth it. It’s not the kind of most people can afford to eat at every day, but like they say, “When in Rome…” Well I say, “When in London, eat at one of Gordon Ramsay’s restaurants.”

***Editor's Note - I wrote this review while on the plane flying back to Canada. Shortly after I returned I had some computer problems and couldn't post it until now. Reading this almost 2 months later, I think that the score deserves to be higher, more like 8.5 - 9. It was an exceptionally good meal.

Posted by adamchiasson at 10:24 PM