I left for the UK/Europe 10 days ago and I set a different kind of budget than most people do when they travel. My budget was 5-10 pounds, and I don’t mean UK currency. I had full intentions on eating my way through UK/Europe, and so far have fulfilled my intentions.

I am currently in Scotland and after a day that started with a traditional Scottish breakfast (more about that on another post), for dinner we went out to one of Jamie Oliver’s flagships, “Jamie’s Italian.”
Jamie is British culinary royalty. He, Gordon Ramsay and Nigella Lawson would be the UK’s most famous of Britain’s culinary exports. I was really hoping to get to one of his restaurants on this trip.


Jamie’s Italian is a busy place, especially on a Saturday night at 6pm. We had to wait for a table, so we sat downstairs in the lounge, ordered some wine and the  “World’s Best Olives on Ice.” World’s best olives? Sure, why not. They were huge, delicious and the word that came to mind for myself and Melanie was “fresh.”


After we moved upstairs and got our table, we ordered a basket of bread that the menu said was “baked fresh, twice daily.” Most Italian restaurants give you free bread prior to your meal. You had to order it here, but you got a nice selection of different breads, and it was fairly cheap 3.65 pounds (about $5.00 cdn).
For an appetizer, I had arancini, which is fried risotto balls stuffed with cheese and ham. They were pretty good and a nice way to start the meal. Alan had “Italian Nachos” which were deep fried mini cheese stuffed ravioli’s smothered in freshly grated cheese. Melanie has a bowl of baked mushrooms. Melanie and Alan and very friendly people and are much like me who are happy to let other people to try their meals, in return for a few bites of yours. Alan and I agreed that Melanie had the best appetizer of the bunch.

When  I go to a restaurant I study the menu, then decide on what I want and then I have to put the menu down right away or else I’ll change my mind dozens of times and then second guess my final decision. I looked at the menu here and for some reason the mains didn’t seem to impress me so I decided I would go with a pasta. The problem I had was I couldn’t decide which pasta to have. The menu has small and large portions of pasta so I was once again in luck and went with the two pastas I was thinking about. I put the menu down and then the waiter came and told us the specials for the night. This threw a wrench in my plans and I instantly started second guessing my decision.


I finally decided on a small portion of the special which was gnocchi with porcini mushrooms in a smoked mozzarella cream sauce, and I went outside of the box with my next choice and ordered squid ink pasta with Scottish scallops. The gnoochi was good, but maybe a little bland. I’m not a huge seafood fan, but I remember seeing a picture of squid ink pasta in one of Jamie’s books that I have so I ordered it. It was really good. The pasta on it’s own tasted normal, but with the tiniest bit of seafood flavour. The scallops were perfectly cooked and overall the dish had a tiny bit of a spicy flavor. I wondered if this was from the squid ink.
Melanie had the ricotta ravioli in a lemon sauce. The dish looked fairly plain but had a distinctly citrus flavour.

Ashley had the carbonara with smoked pancetta tossed in free range eggs. The noodles could best be described almost as an udon noodle. The dish was salty mostly due to the pancetta, but not too salty.
Alan opted for the rabbit ragu. It was the first time in his life that he had rabbit. He said he would have the Easter bunny for dinner. He described the dish as “very hearty.”
We had appetizers so we decided to pass on dessert. Truthfully none of the desserts we jumping off the menu to me and we were all pretty carb overloaded so we ordered lattes to perk us up so we wouldn’t be in bed at 9:00pm on a Saturday night.
When I asked everybody to rank the restaurant on a scale of 1 to 10, the average we had was 7.5/10.
Melanie liked the restaurant because she is “It is a place you could to go dressed up wearing high heels, or in wet running shoes after a day of walking around Edinburgh all afternoon in the rain.”
We all left the restaurant stuffed, and the bill came to 83 pounds (approx. $130 cdn). I thought this was pretty good considering we had 6 appetizers, 4 mains, lattes and wine. Jamie gives you good value for your money. I’m looking forward to the day that he open’s a restaurant in Canada.
Afterwards, we went back to Alan and Melanie's where Alan and I played guitars until the wee hours. It was a great way to finish off a great day. 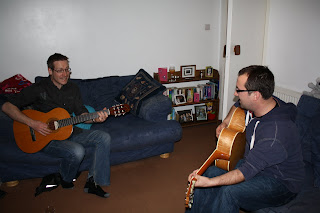 Posted by adamchiasson at 6:48 AM